While outside of the field of statistics, you will generally only hear the term “average,” in statistics this is a non-specific term, and can refer to the mean, median, mode, as well as other “averages,” or measures of central tendency. Most typically, the “average” will simply refer to the mean, this being calculated as the sum of all scores divided by the total number of scores. The median is calculated as the “middle” score, or if you have an even number of cases, and two unequal middle scores, the mean of these two middle scores. Finally, the mode is the most common score – and you may have multiple modes in your data.

Now that you know how each of these measures of the average, or central tendency, are calculated, the question then becomes, when do you use each, and why? First off, the mean would be preferred when you have a continuous (interval or ratio) measure that is normally distributed. While kurtosis (the peakedness of the distribution) will not create a discrepancy between the mean and median, skewness – lopsidedness of the distribution – will. For example, income is positively skewed – you have a large proportion of individuals making low to moderate incomes, while there is a very small proportion of individuals who make millions or even billions of dollars per year. In this case, the distribution has a long tail to the right of the distribution, as shown here (using data derived from the General Social Survey, or GSS): 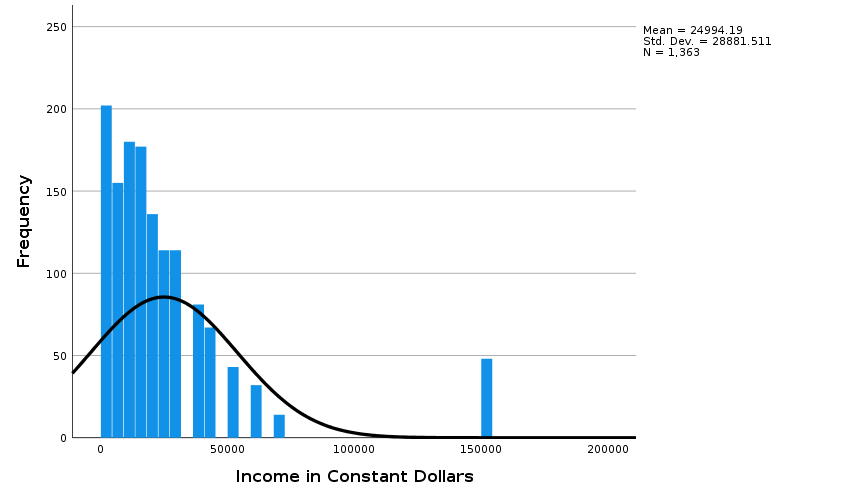 When skewness is present in your data, you want to use the median, as opposed to the mean. Why? Take the same example of income. Those individuals who make enormous sums of money per year, those making millions or billions of dollars, will have the effect of skewing the mean of income upward – the mean will become inflated, and no longer a good representation of what the “average,” or typical, income is. However, the median, or middle score, is not impacted by these outliers, and hence will be a better representation of individuals’ average income. Similarly, if you have negative skew in your data – where you have a long, drawn-out tail to the left – the mean will instead be deflated by these low outliers, and in that sense, will still not be an accurate representation of the average, or typical score. An example of negative skew is presented below. 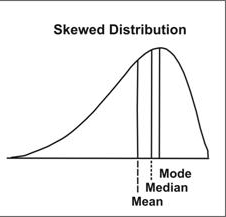 This leaves (among other measures of central tendency, which will not be discussed here) the mode. When to use this? Simply – when you have categorical data, or data that are measured on the ordinal (ranked) or nominal (unranked) level of measurement. In these cases, even if the data are coded numerically, neither the mean or median will present an adequate picture of the average score. For example – say you have an ordinal measure, like highest degree completed, where “1” represents no high school diploma, “2” represents a high school diploma, “3” pertains to an Associates degree, and so on. While the mean or median may present some useful data, this presents several problems. For example, what does a mean of 2.3 really mean? Or 4.7? And how do you take the mean of two different categorical responses, if the median lies in-between the two? And obviously, the mean and median make no sense in relation to nominal variables, such as race or gender. For these reasons and many more, the mode is preferred when conducting descriptive statistics on categorical data.